Pickled cabbage is one of the fundamental russian dishes. The history of it traces back to the Old Russia. When winters are long, and there were no stores to offered vegetables, people had to prepare them for winter themselves. This tradition is still strong to this day.

Many countries have sauerkraut in their traditional food lists. But probably nobody in the world consumes as much of it as our Russian people do. And no country has as big of a variety of pickled cabbage dishes as the Russian cuisine has. No winter feast is complete without sauerkraut. It’s a very healthy side dish as well, so it is always prepared in large quantities. Usually the start of pickled cabbage preparations falls on Sergiev Day (October 8th), which is also called Sergei Kapustnik (kapusta = cabbage in russian). But the general condition is for the outside temperature to be about 0 degrees Celsius, so the day depends on the area of the country. For example, Vladivostok is one of the most southern cities of Russia, so people start preparing sauerkraut only in the middle of November. Another condition is for the moon to be in a certain phase. Not all beginners believe it at first, but then, when their pickled cabbage doesn’t turn out good, the next year they do the right way: during the waxing moon. The process of pickling is not that complicated, but every family has its traditions, and the recipe is passed on to the next generations. All family gets together, and everybody gets a thing to do: weighing the cabbage, preparing the pot, cutting carrots and watching for the amount of salt to be right. The bigger the family is, the bigger the pot should be.

This particular recipe had been passed from generation to generation, and now we want to share it with you.

First you need to weigh the cabbages to accurately follow all proportions in the next steps. Cut the carrots first – with some help of an old soviet food processor. Despite the fact that it was released in the early ’80s, the device works well to this day.

Then cut the cabbage, after taking off a few big leaves from the top – you’ll need them later. We use a special, very old, traditional grater to cut it in long and thin pieces. After you’re done cutting, mix everything in a child size bathtub. Best mix it using hands, gently pressing the cabbage so that it lets juice. In order to get the best tasting cabbage, squeeze it slightly while mixing it with salt, carrots and honey. 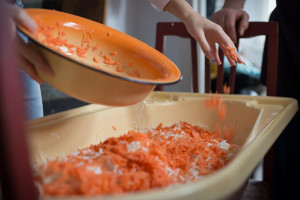 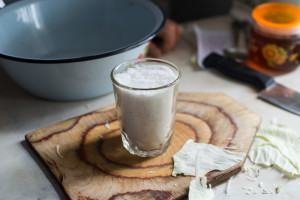 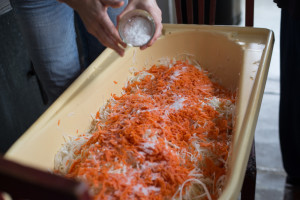 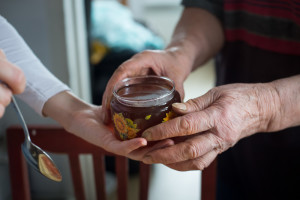 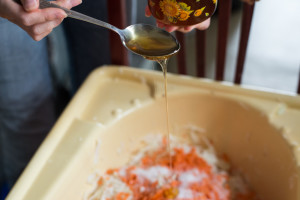 Then put everything in a big pot – we use a very old Georgian wine pot, perfect for pickling cabbage. Cover your mix with the cabbage leaves and a big plate, and place a heavy object on top. This will make the pickling process faster and easier. Keep the pot in a warm place for 3 days, poking through it with a stick every day to let the gas out, then move to a cold place. One week later, prepare several glass jars, sterilize them, fill with your Russian style sauerkraut and keep them in the fridge or in the cellar.